When Microsoft introduced Windows 8 and Windows in Smartphone, flat designs seems to have brought about a revolution and to add on now the iOS7 has left everyone frenzied about them. The designers were not too sure whether the flat designs would actually work but it has just been sometime and these lovely flat beauties seem to have captured the hearts of many. Although the trend in Apple’s iOS7 still seems to be crude but it is a matter of time that they will look equally beautiful on iOS too.

Although flat designs have been here with us for quite some time but it was only with the Windows phone that people started noticing them. Prior to this all the tech start-ups borrowed the realistic graphics, glare effects and all the beautiful elements from the design books of Apple. Looks like Apple is now borrowing its designs from Microsoft. Apple users might debate this but if they go back to details from where it all began the answer is right there.

A flat logo concentrates on minimalistic elements and typography excluding the shadows, complex gradients, feathered effects, bevels, 3D effects and shadows. Flat designs are all about minute details for rudiments, shapes and typography as they cannot be hidden behind shadows, glares or other gaudy effects.

Google, Yahoo and Microsoft have all changed to flat logos which have marked a communal shift in web design. These three are the giants of search engines and changing their logos to flat logos reflects change; a change for something better.

Modern flat logo designs will assist you in crafting a neat a fresh, minimalist and a beautiful visual. Flat logos look simple but it takes patience to create them as they need to look organised and clutter free. Some of the best modern flat logo designs have been mentioned below which are stunning yet simple.

Elegance is not the only reason which has made the flat logos a trend. The simplicity of these flat logos allows them to scale easily which makes them attuned with most of the browsers and devices. Compatibility is an important feature as today’s world seems to be on the move always and have shifted their choices to tablets and smartphones mostly.

It is a beautiful logo featuring a horse; the mustard colour horse in the black polygon background is set perfectly, making the aesthetic look simple yet stunning. The design is minimalistic and is device friendly which means it looks equally beautiful on a computer as well as smartphone or tablet. It works with all the common browsers like Google plus, Firefox etc.

This modern flat logo designed by Jami Raza is made especially for those who are interested in starting a new business venture. The sides of the logo are crisp and the small little set in jet taking off looks amazing and matches perfectly with the theme. The font has been kept simple but matches the theme extremely well. A device friendly logo just right for your new start up.

The flat logo is set in a green background. You might think green to be too vibrant a colour for a complete background but its goes perfectly with the logo and the shade of the green is soothing to your eyes too. The design is in black and is a shape of a safe with the letter “Z” in the middle. The design is set in a square shape with rounded corners. 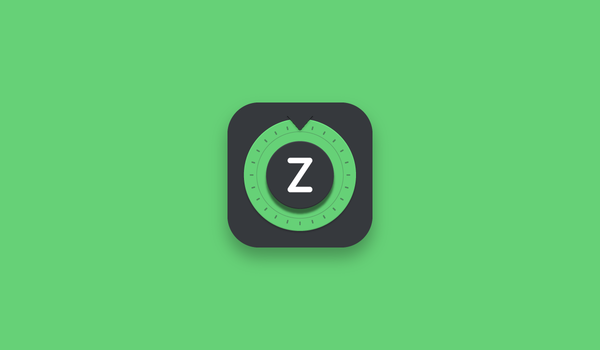 RisatRajin has created a beautiful logo for a photo gallery which is meant to be locked for your security. The design is minimalist and looks creative. A small curved handle which looks like the handle of a lock has been added to the red and black camera which resembles the body of the lock. The creativity is appreciable as the logo looks enticing.

Another beautiful logo which is simple, captures all the exact details and looks uncluttered. The background of the logo is blue and the writing and artwork is in blue too. The logo is screen friendly which means you can see it on the computer as well on the smartphone or tablets without the pixels breaking or design looking blurred. The corners are crisp and the colour combination is praiseworthy. A logo as such is definite to attract a number of viewers just by its looks. 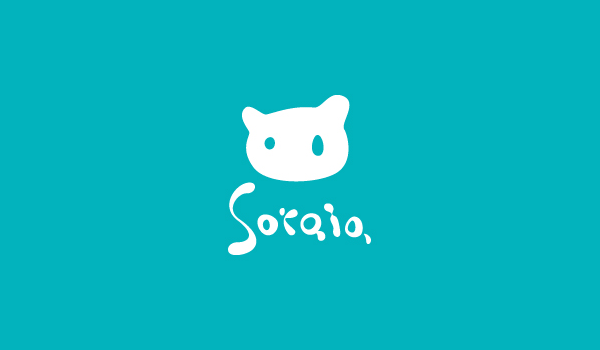 This flat logo is being used by a famous Canadian bicycle company. The logo is sure to grab praises instantly as it looks creative and different. The black moose set on a shade of blue round shape is just what a company needs for their logo. The font colour is white which blends in with the background of the logo making it look more attractive.

The Volcano by Yoga Perdana

The style used in this logo seems to have flooded the site with lovely reviews. The colours, designs and shapes are lovely but what makes the flat logo stand out of the crowd is its texture. The texture of the logo is the unique part of the logo and something which is worth seeing. The volcano is set in a pentagonal background and the colours used for the smoke make it look realistic.

The Modern flat logo Sixbase by Alvin is a creative logo which has been set on a red background and representing number “6” and alphabet “b” in white. The creation is simple and intriguing. The thought of the artist has clearly been reflected which shows in the artistic beauty of the logo. 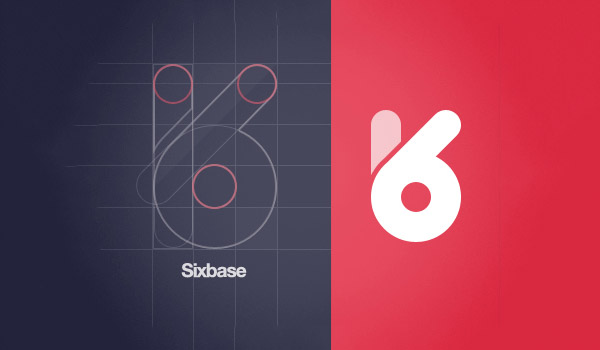 This flat logo has been cleverly designed especially for a home moving company. The entire logo has been set on a white background with a dull black hand. The palm has been shaped in a way to look like a house with a small square block in the centre which looks like the door of the house. It looks like the hand is lifting the house. Clever is the true word to describe this logo. 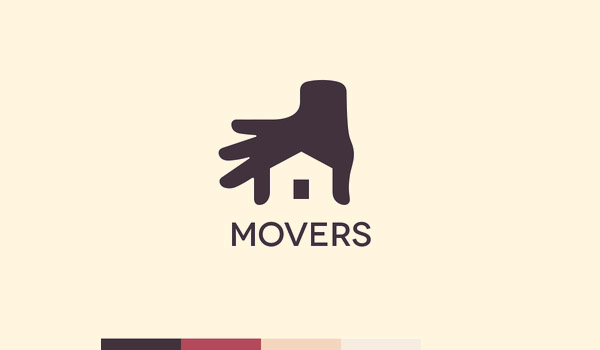 The logo of Web Hosting feature two sets of different colour combinations, one set is a black background with a small red rocket taking off leaving orange and red flames and the writing is in white and orange. The second features the same design but with a creamy white background and the writing and design of the rocket in black. It is all set in the eyes of the viewer to select which combination they would prefer.

Beautify the city! by Abstract Logic

Beautify the city! Is a perfect logo for a paint company. The logo has a single paintbrush in black without any bristles with red paint dribbling over taking the shape of the bristles where it falls. The writing is in black and looks wonderful. There are no background colours set for the logo which makes it look so unique. 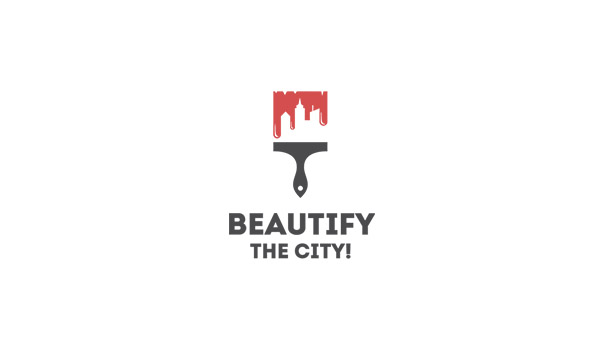 Another logo which hasn’t used a solid background colour instead just crafted the design. The colours used are a greyish black shade and dull red. The jet is in the shade of black with smoke in red colour but the jet looks very tech and is meant for the modern mind. The minimalistic designed logo is crisp and device friendly too.

The entire logo is red on a vibrant red background with design and writing in white. The design is an outline of a bat with vibrations of sound on its either sides. A classy logo which looks perfect for a music company, viewers are definitely going to be lured seeing this design. The flat logo goes well with all the screens and it is browser friendly too.

The logo is set in a transparent background and the design and writings are in black. A chic design which features a face with shades and a headphone which also takes the shape of the head and ears, for the lips the creator has used the vibration of music. 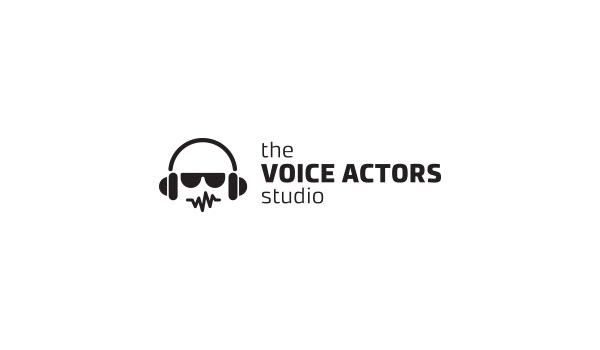 The EB WiFi flat logo features the design of a WiFi in white and a very light pastel shade of green, the entire design and writing is set on a magical blue background. The creator has designed the WiFi with a twist and used the light green colour to highlight the network reception. The words “EB WiFi” is written in white and the font suits the logo.

The logo is perfect for a coffee shop and the colour coding has been cleverly used. The logo presents a hand holding a disposable cup. The hand is skin colour while the coffee cup is in a shade of red with a white cover. The writing is in dark chocolate brown coloured font which is simple yet striking. 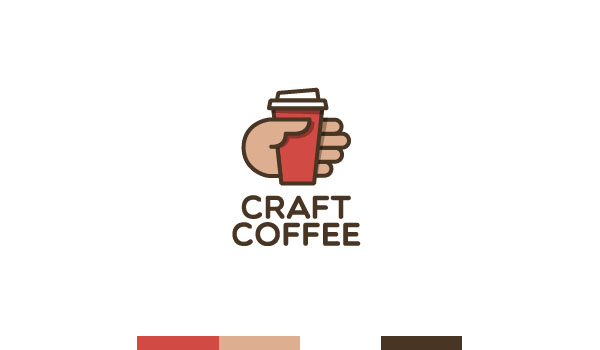 The OkayStag logo has a red coloured background, the red although has a tint of orange and it features the picture of a stag in white. The letters “ok” are cleverly set in the horns of the stag and the words are written in a shade of black mixed with brown.

Graphshot logo has a transparent background and features a bullet. The colours used in the bullet are mild red, blue, light shade of mustard and black. The words are written in blue and red. The bullet is cleverly represented and can be clearly seen shooting off. 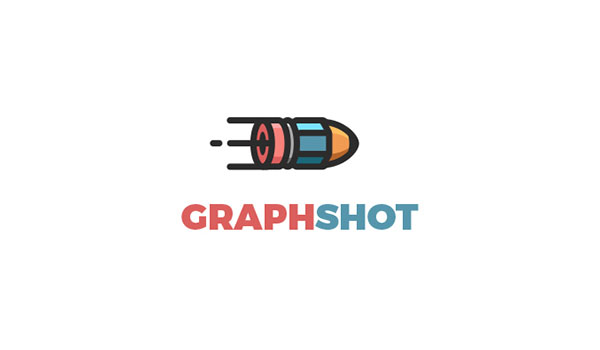 The flat logo design Olympus has been set on a grainy white background with shade ranging from mustard to yellow which have been used in the design and the wordings are in blue. Since the logo is Olympus and associated with the Greeks the design has been inspired by the wreaths they wore but have been represented in rectangular shapes making it more modern.

The most unique flat logo in the list, there are no designs at all a simple green background which represents the colour for avocados, with the word “fiesta” in the centre written in white with a great font. After all simplicity is the core of the flat logos.

This is one logo which will make you fall in love with it instantly. A simple and cute logo, which has a transparent background and a shows a chef which has been outlined using a pan, spoon and a fork with dark green colour and the words have been written in dull black and ask grey colours.

The name speaks for this modern flat logo, it has a red background with the letters “51” written on it with white and the degree sign is blue in colour.

The design of the logo is set in an attractive pink background and the design depicts a professor who is learning. The designed has been outlined in white and is in the shape of an open book with a pair of round glasses placed on top of the book.

Self Logo Design by Chris Couriard

The modern flat logo is a self-logo and shows two “C’s” one of them is orange in colour and is the outer one whereas the inner one is grey in colour. The gap of the letter has the words written in black and moves outwards from the inner “C” to the outer “C”.  The design is very geometric and has a class of its own.